When Painter Philip Guston Started Over

There’s a famous quote, “Life is what happens when you make other plans.” Inevitably the course of events takes us away from our expectations and preferences. What happens then?

Through definitive actions during two key eras of his life, painter Philip Guston (June 27, 1913 – June 7, 1980) manifested two different strategies for reactions. While it’s easy with hindsight and distance to criticize the life choices of others, that perspective also gives us the benefit of knowing the outcomes. By their fruits you shall know them.

The first course Guston took I see as capitulation.

By all accounts, Philip Guston (born Phillip Goldstein) was both a naturally talented draftsman and a focused and determined hard worker. He cultivated his artistic abilities obsessively from a young age. Through the 1930s and 1940s, the facile painter earned awards, mural commissions and teaching assignments across the United States. He became known for painting lyrical and mysterious images of masked children at play. His future as a major art talent seem assured. But the art world Guston assumed he dominated was changing. Art has its fashions and trends, and when Guston started spending more time in New York City, he was stunned to find the type of work he made was considered outmoded. Abstraction had taken over while Guston was out in flyover country. There was an infamous incident when Guston’s boyhood friend, the drip painter Jackson Pollock, publically confronted and denounced him during a party. Accounts vary on whether the event culminated in a fistfight, or Guston retreating in tears.

Life had happened to Guston’s plans of playing a respected master. By the 1950s he was approaching forty, an important part of a man’s life: the cusp of middle age. He decided to try to fit in. Guston began again. He stayed in New York, abandoned his graceful figurative works, and started painting abstractions as well.

Guston regretted this. “I do not see why the loss of faith in the known image and symbol in our time should be celebrated as a freedom,” he grimly noted. As an abstract painter, Guston did not reach the success he had previously known. His version of non-objective painting was called “abstract impressionism” by some; his delicate colors and methodical brushstrokes seemed to suggest the misty landscapes of the earlier French art movement. Still, Guston’s art was not considered significant. As a colleague stated, the book had been written, and Guston wasn’t in it.

By the 1960s, Guston’s paintings had degenerated into dark, ashen clumps, depictions of frustration and blockage. The new movement of Pop art wrecked abstract painting’s preeminence. In the middle of the decade the artist had a full blown crisis; he stopped painting, and even left his wife for a time. This could have been the end, a sad story of a once inspired painter who gave up on his gifts due to peer pressure, and vanished from relevance. Instead, Philip Guston began again, again. He was in his mid-fifties. This time he remained true to his own vision. This was the second response to life happening in spite of his plans.

Guston went back to first principles, making drawings that were next to nothing but marks on paper. But with time depictions of the real world began to creep back in, now iconic and monumental, even when done in a small scale.

Then came the explosion. The images and symbols Guston had worked with throughout his life started forcing their way onto the canvas, powerfully asserting themselves in a new raw, rough manifestation. “…only total immersion in painting ‘things’ settled the issue,” Guston acknowledged. He described, “From 1967-1969 I painted like mad. The pictures came so fast I had to make memos to myself, at a table drinking coffee. ‘Paint them.’ I felt like a movie director. Like opening a Pandora’s box, and all those images came out.” The same art establishment that had led Guston astray rejected his new direction. His subject matter included sinister yet bumbling Klansmen as stand-ins for fallen humanity. These works remain so charged that a recent retrospective tour had to be delayed, to avoid conflicting with contemporary politically correct dogma. The topic Guston exposed here isn’t racism, it’s evil.

Far from safely accusing others of sin, Guston was admitting his own weakness in these ambiguous works. “They are self-portraits,” he confessed. “I perceive myself as being behind the hood.” These were fearless portrayals of a man now mature enough to own his faults and failings. Guston’s paintings became blunt and powerful as he revealed life as he lived it, in oblique symbols.

Philip Guston followed this course for the remaining years of his life. He shared a story of what happened during the horrified reactions to the exhibit which unveiled his new direction. “When [painter Willem] de Kooning saw the show, after embracing me, and congratulating me, he said: ‘You know, Philip, what your real subject is? It’s freedom!’’

This is response to cultivate when life attempts to force us down, and away from our goals. Find freedom, and then get to work. 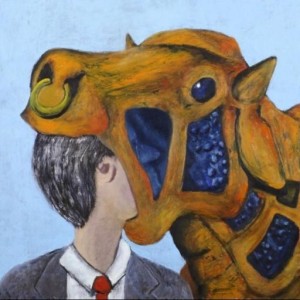